Ikhala: The aloe that serves society 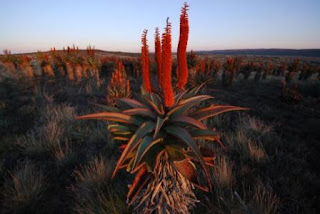 Tony Dold is a botanist ( plant scientist) at the Albany Museum in Grahamstown. He told us about ikhala ( Aloe Ferox) the flowering aloe that is shown in the centre of the official arms ( symbol) of the Eastern Cape Province.

The latin name Aloe Ferox ( literally the warlike aloe) refers to the ferocious spines ( like thorns) on the edges of the elaves and also perhaps to the flower heads that look like spears.

The old leaves remain hanging from the stem after they have dried , forming a "skirt" which is believed to protect the stem from fire.

In the Eastern Cape , ikhala usually flowers between May and August. The flower colour can cary from yellow-orange to bright red. The flowers are carried on a branched crown of spears above the leaves. There are up to eight branches , each carrying hundreds of small tube-shaped flowers.

It occurs in nature over 1000 km from the south Western Cape Province through the Eastern Cape to southern KwaZulu-Natal. It is also found in the south eastern corner of the Free State and southern Lesotho.

It is adpatable to many different growing conditions but is most usually found on rocky hill slopes , often in very large numbers.

Why is ikhala used as a symbol?

Ikhala is beautiful , it is strong enough to survice harsh , dry conditions and it has medicinal properties.

Ikhala appears on our car registration plates (number plates) and on the road signs for the Frontier Country tourism route. It also appears on the medal for the Order of the Mendi , a national honour for bravery.

In the former Ciskei region Aloe Ferox leaves are soaked in poultry drinking water to prevent poultry disease , to fight off ticks and lice and to treat fowl typhoid (Umbathalala).

The leaves are boiled and mixed in the cattle drinking water to prevent Red Water ( Amanzabomvu). The sap (juice) is also applied as a rmedy for scab in sheep.

Literally: He has drunk the juice of the flower of the wild Aloe. This is said of a dull , sleepy person because that is the effect the nectar can have on you.

Posted by Museum Manager at 5:31 PM