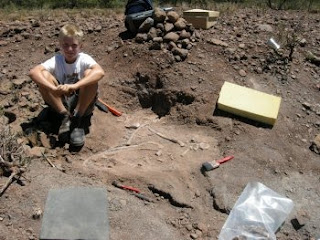 GUY ROGERS
While big fuss has been made , quite rightly , about nine-year-old Matthew Berger and his discovery last month of a fossil hominid in the Cradle of Mankind - we have our won young Indiana jones right here in in the Easter Cape.
Thomas Lord , 12 , is a weekly boarder at Cradock Primary school , and he lives on the family farm Alicedale near Hofmeyr. Whenever he gets home for the weekedn , he jumps on his quadbike , collects a few of his friends , the farmworkers; kids , and goes hunting for fossils.
Word of his keen eye and his all consuming passion of fossils has spread , and one of South Africa's senior paleontologists , Dr Billy de Klerk of Albany Museum in Grahamstown , has on two occassions visited him to examine his finds.
De Klerk is planning a third trip in July to excavate Thomas's latest and most exciting discovery- a handful of bones of what seems to be a Dicyodont called Kannemeyeria , a mmamal-like reptile , the sixe of a juvenile hippo , which lived some 235 million years ago ( about 10 million years before the dinosaurs).
Only about a dozen good Kannemeyeria specimens have been discoverd ever, including one by Thomas's grandfather Willoughby , in the same area, and another by Marjorie Courtney-Latimer of coelecanch fame near Tarkastad.
Kannemeyeria is also significant find because it and other memebrs of the Dicynodont ( which means "two dog-like teeth") family mark an evolutionary transition point. They existed during the tail-end of the Beaufirt Era and were the last reptile line , which then gave way to true mammals , with hair and the baearing of live young.
Thomas chated to The Herald from the school secreatary's office after he was caleld to the telephone. The unassuming youngster said he had " always liied dinosaurs" but real interest in ancinet bones started when he was about five when his Dad gave him a fossil for a present. Further inspiration came when his parents allowed him to turn an outhouse into his own natural history museum- and then he met Dr De Klerk.
While most youngsters from farms have fair knowledge of wildlife and the environment , not many are interested in bones he conceded.
" I suppose they think its stupid but i think it's cool".
Thomas's father David farms cattle and sheep which always means a sprinkling of livestone bones dotted aroudn the veld.
But these are quite different to fossil bones , he explained.
" A fossil is heavy like a rock and it is more brown in colour".
After travelling out to a particular spot on the quad, the young fossil hunters alight and tramp up the dongas where it is most likely that bones will have been exposed by erosion , he explained.
They found the Kannemeyria about 3km from the Lord homestead in an area called Vlekpoort, which is also where a much younger fossil a 36 000 -year-old hominid skull , was discovered , in 1962.
The Hofmeyr Skull is believed to have belonged to one of the earliest human residents of this area.
The Kannemeyria was embedded in the one slope of a gully and there is a possibility some of the bones would have rolled into it. But the hope is that a large part of the skeleton can be retrieved by careful excavation.
Situated int he centre of the Eastern Cape in arid Karroo grassland , Hofmeyr is great fossil country , De Klerk said.
Thomas clearly has a good eye but , more thanthat , he is attuned to fossils, able to pick up their texture , colour and shape even against a confusing background of rocks.
Collecting fossils is illegal without an SA Heritage Resources Agency permit so Thomas has been doing so under the aegis of De Klerk.
With the help of his mother , the boy then brings his frinds in to Grahamstown. he made his last visit during Scifest and also got a chance to examine De Klerk's own collection.
De Klerk said he had known himself by the age of 10 that he wanted to be a paleontologist , and it was wonderful to see the same passion and certainity in Thomas.
SOURCE : THE HERALD , 11 MAY 2010 www.theherald.co.za/article.aspx?id=561592
Posted by Museum Manager at 2:36 PM