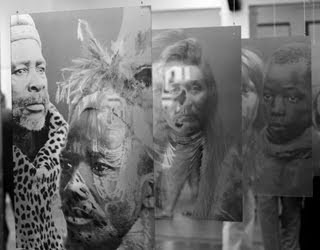 Siona o' Connel and Dale Washkansky
We are passionate about photography; we delight in the magic of the camera and its ability to play with and capture light. In particular whilst we accept and celebrate that the medium may be an excellent vehicle for those of us wanting to tell a story in a language other than the written word , we are aware of the pitfalls and restrictions of photographic representation. A photograph is intrinsically a visual medium. To see a photograph , one not only looks at a photograph , one penetrates its surfaces and glimpses into what was . By association , the gaze is therefore inevitably entangled within this act of looking and knowing. But how much can one know through fact that leads down Alice's rabbit hole- to a den of otherings , classification, difference and power?

We are cognisant too of the role that the camera has played as it imaged the colonial path. This is part of our personal dilemna, how do we come to terms with the photograph. Particularly , in curating Shared Legacies : The works of Alfred Duggan Cronin and edward. S Curtis we asked 'how can we ethically look? How can the eclusivity of the gaze and the frame become inclusive and dialectical'.

This exhibition brings together the works bt these two renowned photographers Alfred Duggan - Cronin and Edward S. Curtis who were respectively photographing in southern Africa and northern America during the late 19th and early 20th centuries, with the intention to document the indigenous peoples at a time when modernity supposedly threatened their way of life. We have chosen to focus in recognising these photographs as potraits , rather than ethnographical and anthropological representations . Bt re-interpreting these images , we are attempting to articulate the forcibly interred by situating them in the art historical canon, where the genre of portraiture has its own legacy.

It is our aim to translate , remember and reimagine the images of these subjects which share hauntingly similar stories. By revisiting these images against the historic canon , we endevour to recognise the 'truths' and 'untruths' of their construction. Both of these colelctions were effective in fashioning the image of the 'noble savage'. Shared Legacies retrieves these images from the 'primitive beyond' in order to reconsider the roles of the photographer , the sitter and the viewer. as such we uphold a performative , re-imagined theorisation of the photographic image , one where the spectator is an active participant in this tripartiete relationship. It is precisely due tot he specificity of the referent and the solidification of a fragment of time that a kernel is planted in order to destabilise the meta-narratives of the past.

Shared Legacies is as much an exhibition of those photographed as it is of us , the viewer. the title of this exhibition speakes to larger questions of looking, of limitations , of temporality and definitions of being human. It invites the viewer to step into the place of the dead; to articulate their silenced ghosts , to speak on their behalf. In looking at the images , we are reflected through their gaze , we are confronted with the image of the self where the other is rendered as the same , where boundaries and definitions are blurred. It is about connections , relationships and dialogue, that out of this space , a new way of seeing and understanding may ensure.

Photographs facilitate knowledge productions and we find that it is in this space of Shared Legacies that the un-named guides us to another form of knowledge. It is within this absence of naming that the ghosts and spectres offer us a way out of the dilemmas of representation and naming. It is in this absence that we can at last savour the blacks , whites and the countless shades in-between.

Shared Legacies Exhibition is presented by the Albany Museum in collboration with the United States Consulate General and the Mcgregor Museum. It will be officially opened by Dr Alberta Mayberry , Consul General of the United States on 21 May 2010. The exhibition can viewed at the Albany History Museum and will run until after the National Arts Festival.