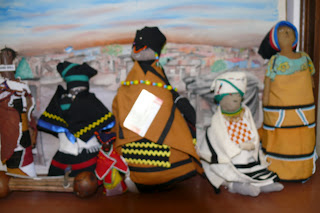 The traditional doll making process is a common occurrence amongst African ethnic groups in Southern Africa. Mostly people would use domestic objects available in their homesteads or areas. Each and every ethnic group would use dolls as symbolic items that marks maturity stages of young girls, for healing processes, and as toys that are less expensive to get. Materials used to manufacture these traditional dolls vary from society to society according to their cultures and their purpose also differs. In our Ethnological study of the African doll making process is that there are various effects considered in order to be recognised as a remarkable doll maker such as gender roles in this case females, age mostly old women ,period markers like primitive or modern stages, et cetera.

It is not only African people who possess the skill of traditional doll making, almost every ethnic group does even globally. As mention earlier on African dolls would reflect a common continental symbol based on the exposures and experiences of the maker as well as universal doll making would be affected by international trade purposes.

The explanation in this case refers mostly to African doll making process based in Ancestral beliefs, customs, norms and values thus reflecting our ways of life. Although the latter used to be of primitive style it has now changed as influenced by modernity which is something we cannot run away from easily. Again our argument is not to prove modernism as negative in our lives but a dominant factor. To say we can restore the past might not be possible at times. We therefore acknowledge the fact that cultures do change for better or worse all we need do is to attach meaning and value when necessary to these treasured items.

Also we can try and restore value by analysing History for modern societies to understand that there is no less important or dominant culture above one another.

Doll making amongst African ethnic communities has been gender based for many centuries to be a women’s role passed to their daughters through generations.
This occurrence has existed for many centuries unchallenged to keep women and children busy at home whilst their husbands and sons are out in the fields ploughing, hunting, et cetera.
In this case elderly women would spend most of their time doing house hold chores including doll making as a hobby and tradition.

The reason why newly weds were not often part of this process it is because they would do some other house hold chores like cooking, drawing water from nearby rivers and therefore do not have time to stay around.

A young girl would be made a doll according to her stage and when she grows she will be given a certain type of a doll aligned to her marital stage.
Young women would learn on how to make dolls from their mothers sometimes but mostly from grannies which became a symbolic thing.

Some dolls are made for specific reasons for instance when a young girl has reach maturity, the mother would make a fertility doll for her to show that she has reached a permitted stage for marriage.

Some dolls are made to mark belief systems amongst traditional ethnic groups such as a doll that you carry when you are sick believed to be a curing doll.
There are times where dolls are made for mourning where a doll would wear Black clothing and it will be a female structure. There are reasons attached to that since people who physical mourns in our societies using dress codes are women.

Sometimes traditional healers uses dolls to keep their magic charms and for consultation purposes.
For instance barren women would be advised to consult traditional healers and be given a doll when treated, it is not known whether the doll carries a medicine inside or becomes a symbolic gesture.

Again Traditional dolls are still made in communities by women irrespective of the places of manufacturing e.g. in local projects or at home. This is a result of the famous belief that dolls are for women although when manufactured in factories are done by anyone. Modern dolls are more decorative than the usual ones for economic reasons.

You can now see colourful clothed dolls unlike in the past where some were made from animal skins. The symbolic meaning has shifted for money making ventures thus hindering past cultural significance attached to them. Currently we are not sure whether that the economic move was a good idea since it takes away cultural values attached to our heritage artefacts.
In an Academic way it’s good to improve or develop our culture, but when one looks at the impact of the changes you can argue the other way round.

Currently people who still make dolls do it at their will, and no longer appreciate it as was before. Also they are taken as just dolls or decorative items no meaning attached specifically.
Kieskamma art project in Hamburg near Peddie makes dolls for economic reasons for tourists ,that is a good example of Eco-tourism influence so to speak.

Acknolwedgement
This is a collection of Anthropological dolls at Albany Museum.
Pictures were taken from Kieskamma Art Project in Hamburg by Pumeza N.Mntonintshi –Curator of Anthropology in May 2010.
Nomthunzi Api assisted in Curation.
Posted by PUMEZA at 10:38 AM