The who is who of Grahamstown graced the official opening of the Shared Legacies exhibition at Albany History Museum on 21 May 2010. Steering the ship was Gugulethu Mhlungu, the charismatic Station Manager of Rhodes Music Radio. The Police Brass Band played some lovely tunes and both the national anthems of the United States of America and South Africa.

Councillor Vumile Lwana, the Mayor of Makana Municipality, said during his welcoming address that
“It is quite befitting that an exhibition of this nature should happen in this month when we were celebrating International Museum Day”. 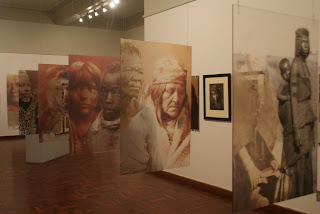 Lwana added that these photographs demonstrate that South Africans have much in common with Americans.

Mark Canning, the guest speaker, was introduced by Professor Julia Wells, a member of the Albany Museum Board of Trustees, and an academic. Canning is a Public Diplomacy Officer of the US Consulate. He has well travelled, having been a diplomat for more than two decades in Warsaw, Johannesburg, China, Prague and Cape Town. He has worked as a college professor, a journalist and a translator who speaks Chinese, Polish, Czech, and French among other languages.

Canning talked more about the sad story of Curtis and his struggles to have his passion for photography recognised.

Curtis, born in 1868, made his own camera at the age of 12 and pursued photography as a hobby in the beginning. After 30 years he had opened a studio, entered and won competitions, had four kids, and got divorced because of photography. He battled to raise money despite having influential friends like President Theodore Roosevelt who was an enthusiastic supporter of his work.

And what about Duggan-Cronin? Well, you will have to wait until the second opening during the National Arts Festival! 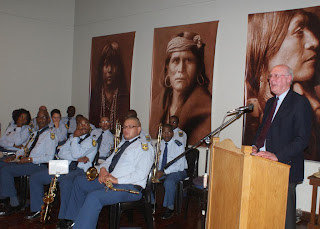 The Chairperson of the Albany Museum Board of Trustees, Advocate Leslie Roberts thanked the huge support and interest shown by everyone. He also thanked everyone who played a crucial role in ensuring that the exhibition is brought to Grahamstown, as its official opening was a massive success.

The exhibition is on until the end of the National Arts Festival, from 09h00 till 17h00 at Albany History Museum, Somerset Street, Grahamstown.