Grahamstown learners off to Mandela Camp

By: Zongezile Matshoba
Albany Museum has selected Thulani Lombo, 16, a grade 10 learner at Nombulelo High, and Anelisa Deliwe, 21, a grade 11 at TEM Mrwetyana High School to participate in the Winter School Camp from 12 June to 21 June 2010. This will be held at the Nelson Mandela Youth and Heritage Centre in Qunu, near Umthatha. The theme for this year is “Enhancing Nelson Mandela’s Legacy through Youth, beyond 2010”.

Deliwe and Lombo are both excited as they have never been to Umthatha.
“I always ask questions, and I hope to learn more about heritage and the museum in Qunu,” said Lombo. Deliwe, on the other hand, hopes to at least meet Nelson Mandela, if possible.

Joyce Sewry from the Chemistry Department at Rhodes University assisted in the selection of the names as both learners are part of the Khanya Maths and Science Club. Nozipho Madinda, the Mobile Museum Services Officer also had to phone their principals and parents to ask their permission.

Madinda welcomes the ongoing cooperation between the two museums that was initiated by Bongani Mgijima, Manager of Albany Museum.

“These learners are going learn a lot about the museum and other learning areas,” she said. 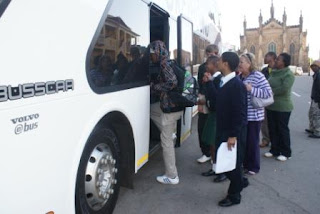 The programme is enriching. Learners will gain insight on forms of art, human rights and responsibilities, financial intelligence, democracy and values and career development. They will also visit Steve Biko sites in King William’s Town, before moving to Queenstown and Bloemfontein.

Nelson Mandela Museum runs educational programs each year in partnership with other institutions. The camp will be facilitated by professionals who are skilled in various areas.

All costs for the camp are fully paid by the Nelson Mandela Museum, including transport, catering and accommodation. Deliwe and Lombo will catch the 9.10am Greyhound bus at Bathurst Street on Saturday, 12 June 2010.
Posted by Communications & Marketing at 12:33 PM