Tourism encouraged to be responsible 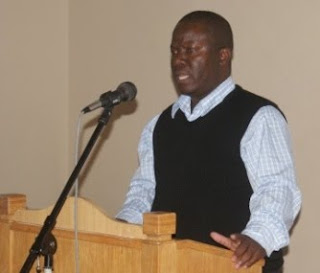 Mgijima compared the three tourism responsibilities like a potjie pot. He said that tourism is about all of us taking responsibility and accountability to ensure sustainability.

He said, “Tourism needs to strive for a balance between the social, environmental and economic responsibilities”. The 3-legged pot struggles to stand if one of the legs is broken.

Mgijima sees responsible tourism to be about minimizing the countless negative impacts of tourism while maximising the positive ones. He is also not concerned about the various names labelling tourism such as eco-tourism, pro-poor, or edu-tourism.

“The colour of the cat that catches the mouse matters very little. As long as it minimises negative impacts and maximise positive impacts of the three legs,” he emphasised to the laughter and enjoyment of all those who defied the rainy, cold evening. 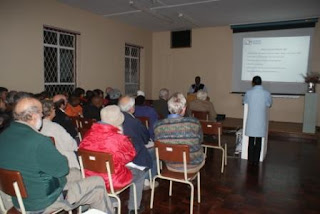 The AGM saw Professors Roy Lubke and M van Wyk-Smith being re-elected as museum subscribers’ representatives. Advocate Les Roberts, Chairperson of the Museum’s Board of Trustees, in his report praised Mgijima for his administrative and management skills.

“He has made a difference to the running of the museum by his strict adherence to management and financial protocols. His capabilities in the nuts and bolts of management, and insistence on proper procedures, have made the task of the Board easier”.

Mgijima joined the museum in April 2009. He has worked for tourism in the Western Cape provincial government, and has attended an international conference in India in March 2008 where the Kerala Declaration of 2008 was adopted.
Posted by Communications & Marketing at 7:55 PM