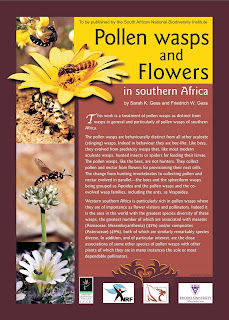 A book Pollen wasps and flowers by Sarah Gess and Fred Gess of the Department of Entomology and Arachnology of the Makana Biodiversity Centre, Albany Museum, with SANBI as the publisher, will shortly be appearing in print. It constitutes an update for southern Africa of the The Pollen Wasps: ecology and natural history of the Masarinae by Sarah Gess published by Harvard University Press in 1996. In this earlier book Sarah gathered together all that was then known on the biogeography, life history, nest building behaviour, flower associations and associated organisms, and examined the role of pollen wasps as pollinators. The bulk of the information on southern African pollen wasps was derived from the studies of aculeate wasps and bees in southern Africa undertaken by Fred and Sarah Gess in the previous 25 years. At that time their studies had not yet extended into the northern Richtersveld and Namibia, the areas in which they concentrated their fieldwork in the next 10 years. These studies, from which have followed a further 14 publications, have added considerably to the knowledge of the diversity, distributions, nesting and flower associations of pollen wasps, making their new synthesis for southern Africa of particular value.

Posted by Communications & Marketing at 4:17 PM