By: Zongezile Matshoba
Visiting Qunu and the Former State President Mandela's birth place was amazing for Anelisa Deliwe and Thulani Lombo from Rhini township in Grahamstown. Embracing the theme “Enhancing Nelson Mandela's legacy through youth beyond 2010”, the group started by visiting eMqhekezweni. They were welcomed by Chief Zanomthetho. He told and showed them where Mandela attended school, played and swim as children, and where they met as traditional leaders. 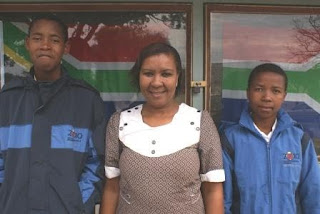 The two were selected by Albany Museum as part of nearly 60 youth from all over South Africa that were attending the winter school camp organised by the Nelson Mandela Museum from the 12 to 21 June 2010.

Deliwe, impressed by the diski dance during Fifa 2010 World Cup, took up dance as part of her art basic intro. Lombo opted for photography to broaden his technological skills.

The group further learnt about the importance of banking, and the use and misuse of credit cards.

They were also exposed to to culture relations and diversity, and the value of knowing one's roots ad customs. They were then showed the film "Ityala Lamawele" (the court case of the twins).

Human rights issues also came up in their camping, with the emphasis on equality and responsibilities. As learners, they were told that they have a right to education, and a responsibility to listen to their teachers and to learn. 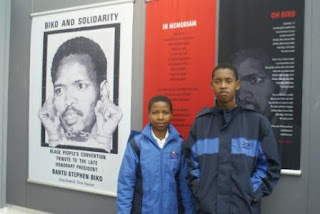 A trip to King William's Town saw the group visiting Steve Biko's home and grave. They progressed to Queenstown where they performed in the city centre, and distributed flyers about drugs abuse, violence, tolerance and human rights. They then took a train to Bloemfontein to learn more about the National Museum and nano technology.

For Lombo, the camp helped him to choose friends, to be aware of drugs and violance, as well as volunteering in non-paying projects.

"Money is not always the main thing," Lombo said. He is glad to have met different people from various backgrounds.

The camp helped Deliwe on the other hand to be a better girl. "It built me to learn to share experiences affecting us girls in particular".

Deliwe and Lombo, like the rest of the youth coming from the camp, are expected to make a difference in their communities and schools and submit written reports if they want to be part of the camp in the future.

Posted by Communications & Marketing at 5:18 PM