Well about the story of KZN Provincial initative in traditional healing story issued by Drum magazine & 2005-2010 intergrated traditional healing report in HIV/AIDS collaboration.It is argued that Kwazulu Natal provincial legislature has given a it's Health department a go ahead to incoporate traditional healing in their main stream health services by allowing these healers to use their normal doctors consulting rooms formally.Some of them are placed within local clinics and hospitals which allows them to make referals to state hospitals.Then again their consulting rooms get equiped by their traditional healing kit starting from drums down to traditional insence(impempo) they use when consulting permissible to be used within the premises.This is a step forward towards recognition of Indigenous knowledge systems in our health care.

These traditional healers are well known around KZN in their practice and after several training sessions & workshops they are issued with practice numbers so as to allow them to open surgeries and be able to sell their medicines officially.They also are permissible to issue out sick note and referal letters when in need as per the Drum article.

Such initiative has been in existence since 2003 co-funded by US Presidential emergency affairs and the state.There are some other stake holders such as CDC(centre for disease control& prevention),Ethekwini municipality & University of Kwazulu-Natal.The project leader is Professor Nceba Ggaleni of KZN.It is also argued that regular workshops are held to facilitate better working relations between Health workers and traditional healers thus creating guidelines on where to start and end between the affected healers and doctors.Also a matter of what to be prescribed and how by these traditional healers is dealt with by UKZN school of medicine through various laboratory tests.Diseases such as TB,Diabetes,HIV & AIDS Diagnosis are sometimes dealt with in traditional manner in the said province.KZN Provincial health care has pioneered the recognition of traditional healing,a step forward towards a better acknowledgement of our Indigineous knowledge systems.Something that most of us has been longing to let it happen in our new inclusive democratic society.

Due to success of this collaboration,University of Witswatersrand is now planning to launch a Bachelors degree up to Masters level in indigenous knowledge systems for Sangomas(Amagqirha)and traditional healers.It has not been explained up to now how will the selection criteria be followed on how to register,since most of them have no matric level so far. 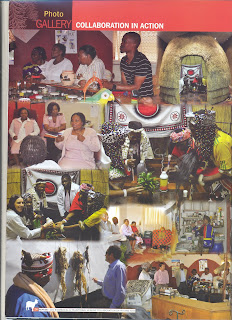