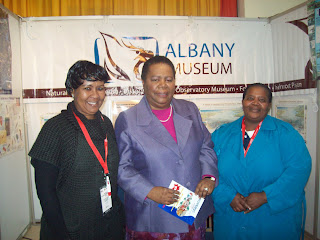 On the 29 July and 1 August 2010 three staff members of Albany Museum, Nozipho Madinda, Ntombekhaya Mtyobo and Luvuyo Mayi attended two separate launch events of the National Science Week held at Fort Hare University (Alice) and at The Great Place at Cofimvaba (Transkei) respectively. At Fort Hare, the exhibitions were represented Albany Museum, Bayworld, Saiab, Rhodes University, 1820 Settlers Monument, Grocott’s Mail (Upstart), National Zoolology, Pest Industrial, Oxford Publishers, and FOSST.
Madinda, head of Mobile Museum had a talk with the students and educators about the history of the Albany Museum and its departments. She mentioned the science research departments and the museum collections that are created by specialists in the fields. She also mentioned the role of the education department that provides education programmes and offer lessons to schools. 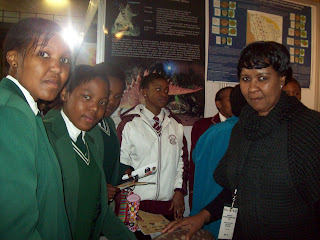 Mobile Museum is an educational project designed to take educational museum resources to farm, rural and urban communities that are unable to visit the museum.
Madinda told the learners of Alice and Cofimvaba about the museum science careers such as palaeontologist, entomologist, anthropologist, ichthyologist, archaeologist, and botanist. They were so impressed and the group of boys said that it is for the first time they heard about the museum careers, and asked which learning areas they can take. She was also interviewed by the national Department of Science and Technology Minister Naledi Pando about the museum stall. Albany Museum stall was of a high standard resulting in the national broadcaster, SABC’s Morning Live taking live pictures, using the stall as a backdrop.
Mtyobo presented the Herbarium artefacts called IMPEPHO (everlasting) (scientific name Helichrysum odoratissimum) and UMTHONZIMA (Sea Bean) (scientific name Entanda rheedii). She said impepho protect people in evil spirit and umthonzima gives people lucky. 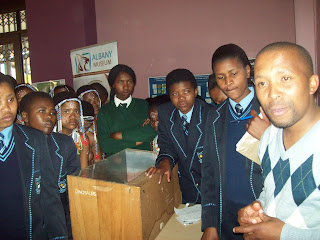 Mayi presented a dinosaur and fossils lesson, and it was a great. It was stimulating, and learners asked many questions. Mayi answered them with full confidence.
At Fort Hare University, Derek Hanekom Deputy Minister of the Department of Science and Technology explained clearly that the students can make research about others careers which they can follow. He further said that the Museum can assist the students to choose other careers except teaching and nursing.
Naledi Pando the Minister of science and technology emphasized that there are better ways of living these days as there are bursaries and scholarships so that they can have better education. She encouraged learners to do maths and science.
Posted by nozipho madinda at 4:34 PM