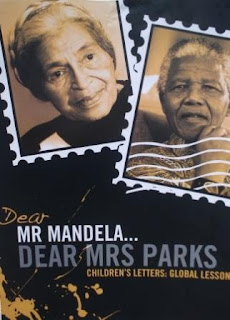 If you were to write to Nelson Mandela what would you tell him? Would you wish him well, or a happy birth day, or thank him for making a huge difference in South Africa? Sometime ago children all over the world wrote to him and the other prominent struggle heroine and human rights activist, Rosa Parks in the United States of America. The Dear Mr Mandela…Dear Mrs Parks: Children’s Letters, Global Lessons Exhibition, to be officially opened on 24 February 2011 at Albany History Museum, is precisely about what those children said to their heroes in these two countries. The exhibition is a collaboration of the Nelson Mandela Museum in Umthatha, and the Michigan State University Museum in the US. It will be officially opened by another civil rights activist, academic and author, Professor Bernard Makhosezwe Magubane. Khwezi Mpumlwana, the CEO of the Nelson Mandela Museum, will give a brief background about the exhibition.

One such letter is from Thabang Mofokeng in South Africa who wrote, “Mr Mandela, we all want to get educated. Why do political parties fight for nothing? I get cross when I see people burning homes and schools and people getting killed”.

Nancy Chen from Ontorio in Canada asked Rosa Parks: “There is no much racism going on in my society. Is the US much the same?”

It is reported in the Nelson Mandela Museum website that Mandela, who shared many values and goals similar to those of Parks, met Parks in Detroit, Michigan, when he toured the United States soon after his release from prison. The exhibition highlights their devotion to freedom, democracy and emancipation, and draws greater public understanding of the parallels in the struggles for equality and justice in the United States and South Africa through the letters of children.

The exhibition will surely inspire the young and old Grahamstonians and visitors, and motivate them to think deeply about South Africa’s former State President Nelson Mandela in particular. Jessica Williams from California for example was moved by Mandela’s winning of the Nobel Peace Prize, and said: “This award represents the recognition and appreciation of the people everywhere for all that you have accomplished. For me, it is reward enough that your efforts have paved the way for a democratic South Africa”.

An educational programme will follow the opening, encouraging more learners to write more letters not only to Mandela, but to their heroes and role models. The exhibition invites children to think of someone who has made a difference in their lives, their community or the country, and write these letters to honour and thank them.

The letters will be posted to the Nelson Mandela Museum. The South African Post Office has been asked to kindly donate stamps and other educational material. Grahamstown FM Community Radio is going to read on air some of these letters on Thursdays between 5 and 6pm. Upstart, a community youth newspaper by Grahamstown youth will also participate.

These future leaders will emulate others globally, from as far as Australia, Canada and Cameroon who were encouraged by the resilience and the stance of the two leaders. Some wanted to know what made them chose that route, and what it meant to them and their families to spend some time in prison.

The exhibition will be opened until after the National Arts Festival.
Posted by Communications & Marketing at 10:37 AM