Mandela and Parks never gave in 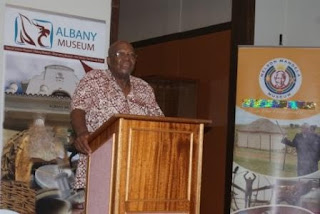 Professor Ben Magubane is thrilled to have known both Nelson Mandela and Rosa Park. Magubane left South Africa in the 1960s after a land dispute between his father and a farm owner. He arrived in the United States to study at the University of California (UCLA). In 1962 he had a privilege of shaking Parks hand when she visited to address the university students.

“I was amazed that this ordinary woman started what sparked the civil rights movement throughout USA,” Magubane said. He was a keynote speaker during the official opening of the Dear Mr Mandela…Dear Mrs Parks: Children's Letters - Global Lessons Exhibition. This exhibition opened at Albany History Museum on 24 February 2011.

Parks was a humble Southern person who sat down in a bus and refused to vacate her seat for a white person and go and sit at the back where blacks or people of colour were suppose to be seating.
Mandela, on the other hand, is an aristocrat, an Mkhonto Wesizwe veteran whose political career was shaped by Walter Sisulu when they met in Johannesburg. He spent 27 years in prison fighting for democracy and human rights.

“The rest is history,” Magubane added.

Magubane was introduced by Professor Jimi Adesina, a sociologist from Rhodes University. Adesina applauded that Magubane studied under difficult conditions.

He said, “Magubane is one of the finest, 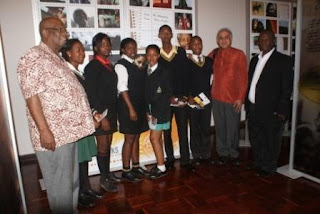 outstanding sociologist although he started studying very late. If he could achieve that in that period so could our children today”.

The exhibition is at Albany History Museum until after the National Arts Festival. It will also have an educational component where learners will be encouraged to write more letters to honour and thank their heroes who have made a difference just like Mandela and Parks did.

Kwezi Mpumlwana, CEO of the Nelson Mandela Museum in Umthatha gave background to the exhibition.

The letters will be posted to the Nelson Mandela Museum, courtesy of the stamps and stationery donated by the South African Post office.
Posted by Communications & Marketing at 4:53 PM