The South African Post Office delivers whatever it takes indeed. SAPO has joined hands with Albany Museum in Grahamstown and the Nelson Mandela Museum in Umthatha to ensure that letters have stamps when posted. 600 stamps and other educational material have been donated for children’s letters that will be written during the Dear Mr Mandela...Dear Mrs Parks Children's Letter - Global Lessons education lessons. This is an outreach programme and part of the exhibition which opened at Albany History Museum on 24 February 2011. 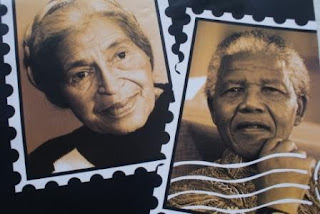 exhibition developed by the Nelson Mandela Museum in the Eastern Cape, South Africa and Michigan State University Museum and the Keeper of the Word Foundation in the United States. It also features a DVD with speeches by Bishop Desmond Tutu, and the United States President, Mr Barrack Obama. It was opened by the scholar, author and activist, Professor Bernard Makhosezwe Magubane.

The educational programme encourages more learners in particular from rural, farm and townships to write more letters not only to Mandela, but to their heroes and role models. The exhibition invites children to think of someone who has made a difference in their lives, their community or the country, and write these letters to honour and thank them. The education programme will run from March to July 2011.

These future leaders will emulate others globally, from as far as Australia, Canada and Cameroon who were encouraged by the resilience and the stance of the two leaders.

The letters will be posted to the Nelson Mandela Museum as stated in one of the exhibition panels.
Posted by Communications & Marketing at 9:19 AM