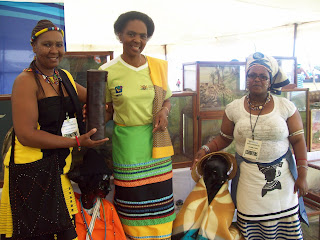 The H.O.D Mobile Museum Nozipho Madinda and Boniswa Tana of the Archaeology Department attended the Human Rights Celebration at Cradock on the 19 and 20 March 2011. Our part was to exhibit the Albany Museum artefacts.

The first day saw a Reverend James Calata memorial lecture delivered by Charles Nqakula. He explained that Calata was a South African Christian. He was a writer and also a musician. Rev. Calata composed a song called (unzima lomthwalo ufuna amadoda namanyange). He was one of the Cradock 4 ANC members who fought for Human Rights. He was a Secretary General of ANC in 1946. Nqakula said the youth of South Africa has a role to play to ensure that the work done by Calata in the struggle for freedom is maintained. He further said that the youth of today need to show that they can rise to the challenge as the youth of yesterday did.

On the following day, Human Rights Day was celebrated. The purpose of the day was done by the honourable MEC Xoliswa Tom. Her speech was about the 69 people who were shot and killed at Sharpsville on 21 March 1960. They people fought for freedom. The policemen were radical and aggressive. They wanted people to carry passes at all times.

The keynote address was made by the honourable Premier Noxolo Kiviet. She thanked the people of Inxuba Yethemba for attending the celebration. She explained that Cradock is the home of Cradock four. The Cradock 4 were the one who fought for the country and also fought for the human rights as enshrined in our new constitution and no one can violate other people's rights. She explained that we must work together to promote and protect human rights for all. Not all of us had a right to vote, but things have changed now. She encourages people to vote on the 18 May 2011 during the Municipal elections. She also encouraged the educators to teach human rights lessons and she said human rights lessons are much more important to learn about at s 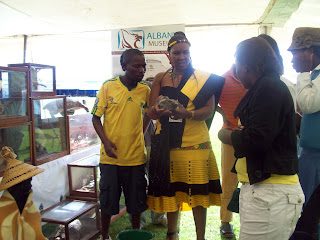 The attendance was good and the celebration was successful. The Mobile Museum Service Department would like to thank the department of Sport Recreation Arts and Culture for the invitation.
Posted by nozipho madinda at 11:17 AM