Praises for reaching out to smaller museums 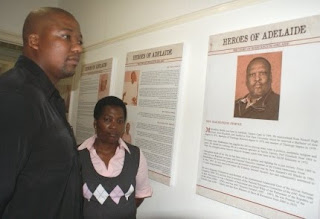 Thabang Tshobeni’s expertise and creativity has been praised for all the wonderful work he has been doing for the Our Heritage Museum in Adelaide. On 17 March 2011 the Museum opened its third exhibition designed by Tshobeni, titled “Only Time Will Tell”. The other two were the Ithongo curated by Mpho Molapisi, former curator of Anthropology and Rock Art curated by Celeste Booth of Archeology.

Albany Museum has been dedicating time and resources to assist smaller museums in the Eastern Cape. Tshobeni, Albany Museum’s head of Exhibition has already travelled to as far as Graaf Reinet Museum and Burgerdorp Museum before.

Patricia Mafu, Manager in the Directorate of Museums and Heritage in the Department of Sports, Recreation, Arts and Culture (DSRAC), said: “Albany Museum is always supportive of each and every museum that has a project”.

She genuinely thanked Albany Museum and Tshobeni in particularly for assisting Zendi Ngonzi, Our Heritage Museum Acting Head, for her endless efforts and initiatives to transform the museum in Adelaide.

The Only Time Will Tell exhibition is about community members who resisted and fought against oppression during apartheid era. These included Reverend Makhenkesi Stofile, for national Minister of Sports and Recreation, and Makhaya Smuts Mhana, the current Executive Mayor of Adelaide.

Mawethu Kondile, Assistant Manager in the Directorate of Museums and Heritage (DSRAC) said that the exhibition will make the museum to be really “ours”. 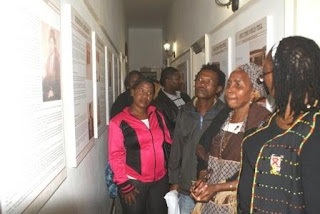 The Mahomba family could not contain themselves when they saw their relative in one of the exhibition panels.

Tshobeni’s task is not yet over as the community has been urged to visit the museum, view the exhibition and contribute further until other missing heroes are added.
Posted by Communications & Marketing at 4:40 PM