Sibabalwe Quma of Victoria Girls High School, and Billy Jokani from Nombulelo High, two of the four learners representing Albany Museum from the Makana Municipality, and the first ever group to represent the Eastern Cape in the Robben Island Museum Isivivana Spring School, relived their 2010 experience. 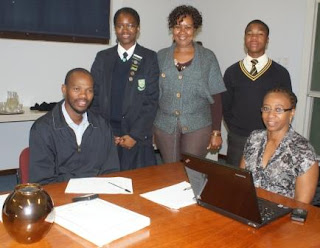 Luvuyo Ndzuzo, the Outreach Officer, and Nomatshayina Noah, the Public Programmes Unit Manager, both visited Albany Museum to meet these learners among other things. They wanted to find out the learners’ experience of Robben Island, how did it impact on their lives, and what have these learners done thereafter.

The 2010 theme was "Africa Unite: Fight xenophobia". Learners came from the nine (9) provinces of South Africa, and other SADC states such as Namibia, and Zimbabwe.

Quma confessed that she knew about xenophobia, but remained ignorant until it affected her. Her Malawian friend was nearly refused entry at a school where Quma’s mother was a teacher. Some learners also found it very difficult to accept the Malawian because of language and cultural differences.

Jokani had a similar but sad experience about xenophobia. A Pakistani was shot dead in his Joza area, in Grahamstown.

Quma and Jokani took radio and drama electives respectively. Their meeting with other Africans from as far as Burundi opened their eyes. They shared their different viewpoints.

For the two, Robben Island did not look like the kind of prison they had in mind as it has been renovated. But, for Quma “imagining and reliving the whole moment of being a prisoner” while in Nelson Mandela small prison cell was unbearable. 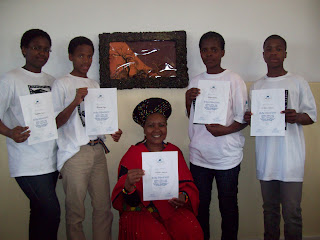 Back home, Quma and Jokani have been sharing their acquired knowledge with their schools and others such as the Seventh Day Adventist (SDA), a private school which has some foreign teachers and learners. They were assisted by Nozipho Madinda, Albany Museum’s Head of Mobile Service who accompanied them to the Spring School.

They further hope to air their impressive audio recording, anchored by Quma, and summarising the Spring School activities, at both the Grahamstown Community Radio and the Rhodes Music Radio.

The 2010 Spring School group is heading back for Robben Island this year to kick-start a new programme, the Youth Leader Academy.


Young Grahamstonians off to Robben Island

Posted by Communications & Marketing at 6:56 PM