It is with great interest to note that Bongani Mgijima, Manager of Albany Museum is a product of the Robben Island Museum (RIM) which started Isivivane Spring School in 1998, catering both for learners and postgraduates from SADC. He went on to establish the Lwandle Museum in the Western Cape, worked in several government departments, before returning to the museum sector to lead Albany Museum. 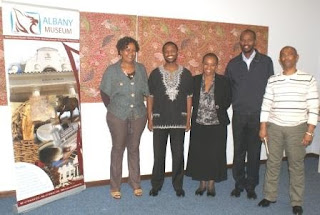 The Spring School programme will from this year onwards be extended beyond Albany Museum and cater for learners throughout Eastern Cape museums. Only Amathole Museum in King William’s Town, and the Fort Beaufort Museum, both from the Amathole District Municipality headed the call so far.

The three museums are now tasked with selecting four learners before the 30 June 2011. The learners must be from a disadvantaged background, especially the farm and rural areas, be between 16 and years old, and be in grade 9 to 11.

The learners must also know and be willing to learn more about the history and heritage of the Eastern Cape, and commit to share the RIM’s experience with other learners and communities after the Spring School.

Despite severe lack of funds, RIM still hopes to cover accommodation and meals expenses. The museums have been urged to raise funds for transport to and fro Robben Island.

From 2011, RIM will also be starting the Youth Leader Academy, a higher programme encompassing the 2010 Spring School group. The aim is to enable and instil leadership qualities. The learners also have to know and appreciate that Robben Island is a world heritage site as a result of the history of the country that needs to be preserved.

The good news of taking Eastern Cape museums and heritage sites on board were revealed by RIM’s Nomatshayina Noah, the Public Programmes Unit Manager, and Luvuyo Ndzuzo, the Outreach Officer, in a nationwide campaign which saw the two also visiting the rest of the provinces in the country.

Young Grahamstonians off to Robben Island
Posted by Communications & Marketing at 6:58 PM