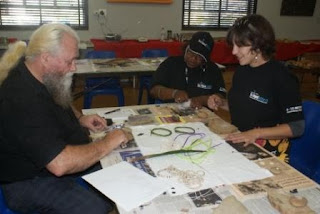 Albany Museum does not only lay a major role in providing strategic venues for the Scifest. Once again 2011 sees Albany Museum produces another newcomer into the Scifest Workshops, Celeste Booth, presenting three workshops.

Booth, an assistant curator under the guidance of Dr Jahan Binneman, will be assisted by Natasha Higgit, another archeologist in the making and an intern, and Bonny Tana, a general assistant, all in the Department of Archeology at Albany Museum.

This workshop looks at jewelry-making, using ostrich eggshells by prehistoric humans in particular.

The work is about tools used and their development during the Early, Middle and Later Stone Age. Participants will surely leave the workshop having experienced making their own tools.

This third and last workshop discusses the sustainability of rock painting from hundreds of years gone by. Secrets of the Sans, the hunters who used to do these paintings, consisting mostly of animals that they hunt, are shared with the hope of seeing how long will the painting by participants survive.

Anyone interested in any of the sort out workshops must be well in advance at the monument.

For more information and full details about the science festival, please visit:
Posted by Communications & Marketing at 6:52 PM