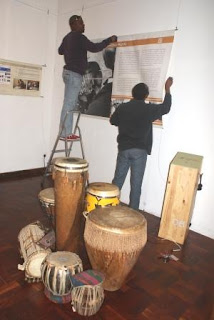 Traveling to Grahamstown was another new ball game as Tshobeni was all alone since Taljaard resigned in October 2010. Lambley continued to give assistance, designing posters and invitations. Tshobeni worked around the clock to ensure that every detail comes alive, ranging from music to film, and from musical instruments to Tracey’s history. 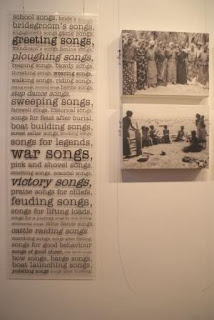 arrival in South Africa, his discovery of African music, and his expeditions and endevours to capture and preserve African music for future generations.

Tracey traveled the breath and length of Africa to record almost every type of music that Africans sang in countries such as Zimbabwe, Namibia, Kenya, Mozambique, Lesotho Swaziland and South Africa. Africans used various rare types of musical instruments to sing songs for almost everything including weddings, ploughing, war, weaving, et cetera.

Lambley will conduct educational lessons immediately after the opening for all interested schools in and around Makana and Cacadu Municipalities.

The exhibition is opening for the public at Albany History Museum on 06 May 2011, and will run throughout the Scifest and the National Arts Festival.

More on For Future Generation:-
Posted by Communications & Marketing at 5:14 PM