MEASUREMENT AT OBSERVATORY DURING SCI-FEST 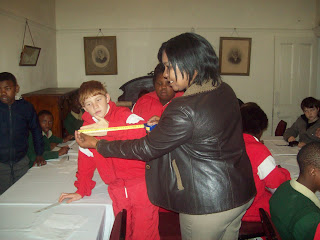 The first part of the Scifest “Measurement” workshop was done by Nozipho Madinda Mobile Museum educator.She divided the learners into groups with different activities such as:
• measuring food using a food scale,
• Using tape measures to measure doors and tables,
• Body measurements,
• A hand span activity and
• Using a scale to measure their weights and their heights from largest to smallest, tallest to shortest.

Boys and girls enjoyed the workshop, even the report back. There was even time to draw shapes and measure those. The four workshops were popular and fully booked.

The second part of the Scifest “Measurement” workshop happened in the Victorian Kitchen in the basement of the Observatory Museum, our most famous museum in Grahamstown. Fleur Way-Jones, Historian, showed the eager learners the old pint jugs, the spoons and scale (marked in ounces and pounds). Boys and girls from local and rural schools poured, scooped and weighed comparing the weights on the old scale and the new one. 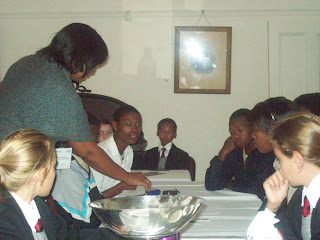 Posted by nozipho madinda at 10:53 AM