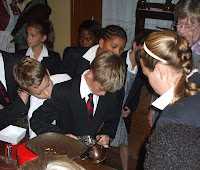 What’s cooking in a Victorian Kitchen
By Fleur Way-Jones
The second part of the Scifest “Measurement” workshop happened in the Victorian Kitchen in the basement of the Observatory Museum, our most famous museum in Grahamstown. Fleur Way-Jones, Historian, showed the eager learners the old pint jugs, the spoons and scale (marked in ounces and pounds). Boys and girls from local and rural schools poured, scooped, weighed, comparing the weights on the old scale with that of the new one. 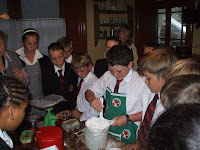 Then a learner-chef (a strong contender for the Master Chef contest) put on the green apron and with a few helpers, prepared scones, according to the recipe of the day. There was strong competition between mothers’ recipes. One recipe needed more of this; the other one a little of that. Each time the cooked scones were served to the group that arrived the next day and they made their comments – “nice and tasty”, “a bit flat but sweet enough”,etc.

So Master Chef Observatory style was born! Well thank you to Anthony from Kingswood and Sizeka and Ayanda from Amasongo School for being such great chefs! 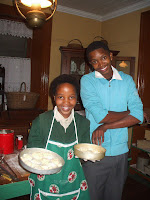