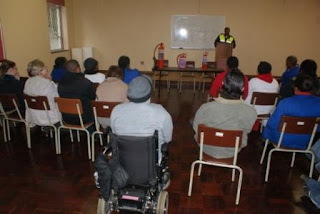 The newly formed Health and Safety Committee at Albany Museum started on high gear when it organised an eye-opening briefing by the Makana Municipality Fire Department.

An excited fire expert, Robert Brooks said he could now breathe a sigh of relief as it was only Albany Museum that he has not served throughout his 27 years in the field.

He started by outlining what he called the four Golden Rules that must be followed in the event of a fire. He advised that:

1. The alarm must be rung
2. The fire department be notified
3. Staff registers must be collect by those in charge
4. An evacuation plan must be followed. Highlights of the plan should include:-
* Closing windows and doors
* Turning off all electrical equipment
* Using existing fire extinguishers to put out small if and when necessary

Surprisingly, no one seems to know the emergency Fire Department number - 046-6224444, when Brooks asked for it. The audience gave the South African Police Service (SAPS) emergency, 10 111 number instead.

Getting into the main business, Brooks explained how the fire works. He drew up what he called a triangle of combustion. He said that a fire needs three things to burn: oxygen, heat and fuel. Putting out any of the three makes it very difficult for the fire to spread further. He then categorised fuel into A - Combustibles, e.g. wood, paper, textiles; B - Flammable liquids e.g. petrol, paraffin, diesel, ethanol, oil, grease, benzene; and C - Electricity and electrical equipment. 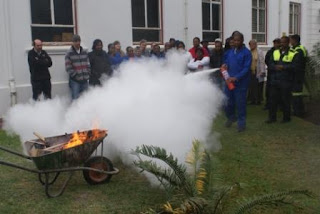 Following that was the more interesting part, and one that seem to concern everybody, especially the researchers who seemed concerned of losing valuable collections gathered over a number of years. Everyone wanted to know how to put out the fire to save the building, collections and jobs.

He also highlighted the importance of reducing oxygen whenever there is a fire as it helps the fire to burn. This could be done by closing all doors and windows, and using the fire blanket and sand which must always be kept in a bucket. He also warned of using water to reduce heat, as water is also a good conductor of heat.

He said, "To get rid of heat use water, but you cannot use water on electrical fires or flammable liquid fire".

Fire causes panic and havoc. Thinking of dying in fire and smoke make people to scramble for exit at all costs, resulting in some tripping and falling, while others succumb to smoke inhalation.

Brooks advised that all escape routes and alternatives during emergency must be clearly marked and unblocked. This must cater not only for staff, but also for the huge amount of different visitors to the museum, including children and people with physical challenges. Once everyone has been evacuated, it is very important to assemble them in one point to check if everyone is safe.

Albany Museum which was once gutted by fire in 1941, destroying some of the exhibitions in the Albany Natural Science Museum building, seems to be safer from now onwards.

Following this informative and educational session, Brooks to the staff outside to demonstrate how to use a fire extinguisher to put out a fire.

He also encouraged staff members to enroll for a fire elementary course.
Posted by Communications & Marketing at 4:24 PM