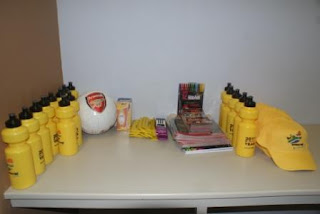 One would have been forgiven to think that Nozipho Madinda, the Albany Museum Mobile Services Officer is participating in the Grahamstown Tourism Amazing Chase, or in one of the infamous treasure hunt shows. Similar to a marathon runner, she went up and down Grahamstown, covering reasonable kilometers, with the Mandela Day name tag, and the Grahamstown community cheered and cherished her endeavours.

“I have to quickly dash to City Fashions, Diamond, Fruit and Veg, and then to Pick n Pay,” cried Madinda in high gasp as she was finalizing the collection of donations for the Mandela Day on Friday, 22 July 2011 at Zintle Farm School in Manley Flats.

Surprisingly, she came back complaining that the Museum van could not start when she left Kingswood College. She had to ask the learners to push it, and then she kick-started it.

“We must ask for a donation for a new van during the next Mandela Day,” she joked to Heine Kohl, the Museum's Maintenance Department Supervisor.

The afternoon was all the same. The Museum telephone kept on ringing, asking for her while she answered her cellphone. She had a very short lunch, eating just for ten minutes while standing. She had another appointment with High-Tech Security company.

The Museum staff did not disappoint either, in particular the retired Entomologist, Dr Sarah Gess. She went out to buy four soccer balls for the four schools. Rhodes University Community Engagement delivered its own bag of donations. 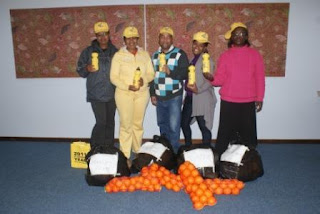 The last part of the afternoon saw her giving orders to Museum staff that was helping her divide and label the donations for the four farm schools.

When everybody else was knocking off, another call from Kodak came in. In desperation, she dashed out once again.

Grahamstonians must be really proud of reacting positively whenever the Museum calls for their support.
Posted by Communications & Marketing at 9:45 AM