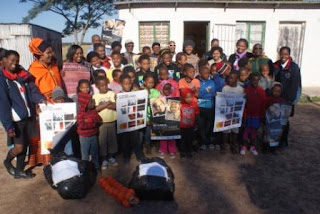 They went, they saw, and they were impressed. Gcobisa Mjele, a learner at Mary Waters High School and Nolubabalo Ralo from Ntsika High School poured out their hearts during the belated Mandela Day organised by Albany Museum at Zintle Farm School recently.

This was their first community outreach as part of youth empowered by the Mandela Youth Camp that they attended at the Nelson Mandela Museum in Umthatha during the winter school holiday. The camp had over 45 learners from all over South Africa. 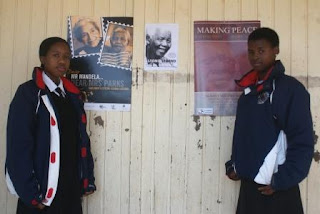 “It taught us about the struggles that former State President Nelson Mandela endured … and Mandela values,” Mjele said.

She added that “There were enriching and inspirational presentations on different cultures and uniqueness by the nine provinces”.

That the programme was organised by a museum did not shy away from a topic about museums and heritage. They learnt about the purposes of the museums, museum careers and job opportunities.

Ralo said: “We were taught about what heritage defines, things of the past, museums and monuments”.

Other popular topics were the school uniform issue, where many agreed that it is still important for identity and representation.

Interestingly, Ralo said, they also debated popular technology like Mixit, and its impact on learning and teaching, especially sentence construction during examinations.
The groups were involved in electives like fine art, photography and craft. The works were presented in a gala dinner.

The two said they would never forget such an opportunity and are grateful that Albany Museum chose them.

"To be where Mandela was grew, and to be taught to follow on his footsteps and continue his legacy is an honour that we will cherish forever," they said in unison.

Posted by Communications & Marketing at 5:30 PM