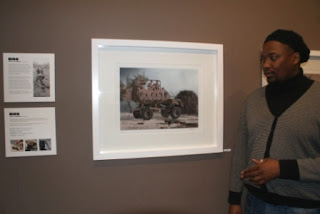 Christo Doherty's BOS, the constructed images and the memory of the South African "Bush War" opened at Albany History Museum this evening, 8 August 2011.

Both Doherty and Gary Baines, the Associate Professor at Rhodes University's History Department have insurmountable praises for Thabang Tshobeni, Albany Museum's Exhibitions Department. Tshobeni put enormous effort in ensuring that all the pieces of the exhibit are in place, despite the tight schedule. Bongani Mgijima, the Museum's Manager, was thanked for his understanding in giving the space for the exhibition.

Doherty, the Head of Digital Art at University of the Witwatersrand's School of Art, generated considerable acclaim and controversy he exhibited this work at the Johannesburg's Resolution Gallery of Digital Art. For example, a letter to the editor of the Mail & Guardian (4-10 February 2011), interestingly by Paul Wessels of Grahamstown, said Doherty artistic work has created 'a martyrology, turning the foot soldiers of apartheid into victims'. The challenge is on the Grahamstown community to come in droves and share their view points, Doherty said.

It has been made possible by the South Africa Netherlands Research Programme on Alternatives in Development (SANPAD).

Posted by Communications & Marketing at 7:37 PM