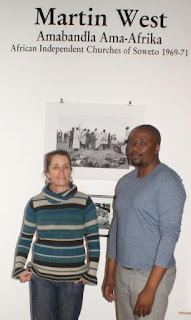 One down, one up! Is it not stretching too much for Thabang Tshobeni, the Albany Museum Exhibition Officer, and Bongani Mgijima, the Museum’s Manager? Well, it seems unlikely if one is privy to the number of e-mails the two have been sharing. That was followed by a trip down to the University of Cape Town (UCT) that Mgijima undertook on Monday, and only to be back by Thursday morning.

The sooner the Museum opened the same morning, Tshobeni was at it again, putting up the Amabandla amaAfrika exhibition with Claire McNulty, having taken down the ILAM’s exhibition on Hugh Tracey with Elijah Madiba at the beginning of the week.

McNulty is the Assistant Curator of Visual Archive at UCT’s Library.

The Amabandla amaAfrika is part of our heritage detailing the unsung heroes who provided spiritual strength during difficult times in South Africa. It is based on the PhD work of Martin West, former Deputy Vice-Chancellor of UCT, and deals with about 900 black independent churches in Soweto between 1969 and 1971.

It will open around September at Albany History Museum as part of the heritage month.

Posted by Communications & Marketing at 5:15 PM