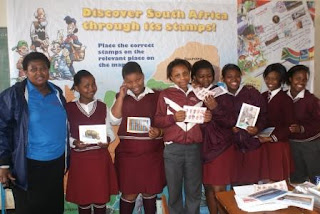 Many interesting questions were being raised on whether Grahamstown, being a historic town, does feature at all in many of the South African stamps produced so far. These were coming from learners when Dineo Poo, the Business Development Officer in charge of the youth activities in the South African Post Office Philatelic Services visited Grahamstown this week to conduct stamp collection lessons to various schools in Grahamstown along with Albany Museum’s Mobile Museum Officer, Nozipho Madinda this week.

Poo shared the educational value of both the commemorative and definitive stamps. 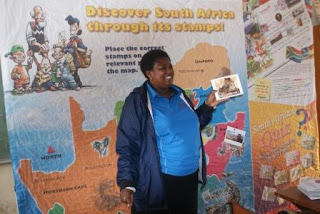 She said, “Stamps are a pretty picture and a result of art work. We employ artists that capture our landscape and tell us what is happening around us”.

She encouraged interested learners to study graphic design if they want to design stamps, and to enter the design competition whenever there is a call.

Stamps are the most important receipt, especially to philatelists who collect stamps all over the world for various reasons. Many collect stamps of the same theme such as birds or trains. New and cancelled stamps are collected. The most expensive stamp worldwide so far is the tiny Treskilling Yellow stamp at around R59 million (5 Million Pounds) in 2010.

“Stamps tell a story. They teach us about our history, nature, people, and culture,” Poo told the learners. “They are little ambassadors reaching every part of the world”.

She showed several stamps and made examples of the Big Five that attracts many tourists to our country; the Fifa 2010 Soccer World Cup Stadiums; and Chief Bambatha kaMancinza, leader of the Zondi clan led the Bambatha Rebellion and was beheaded for fighting taxes imposed on blacks in Zululand.

Learners were encouraged to start writing letters to friends and family members as stamps are mostly cheap. Letters and postcards are memoirs that are cherished forever. The Universal Postal Union which governs postal services worldwide runs an annual competition on letter writing, in its 40th year, for young people up to the age 15 years. The 2012 theme is: Write a letter to an athlete or sports figure you admire to explain what the Olympic Games mean to you”. By 30 April 2012, each national winner’s letter from participating countries must have been submitted for adjudication internationally. Winners are awarded prizes on World Post Day on 09 October every year.

Posted by Communications & Marketing at 10:46 AM