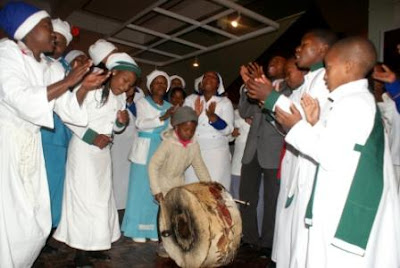 Exuberant and amazing choruses engulfed Albany History Museum as a number of African Independent Churches from around Grahamstown and Port Alfred, led by Archbishop Bheyi of Heroes Church of Zion in South Africa, sung and danced during the opening of the Amabandla AmaAfrika: African Independent Churches of Soweto 1969-71 exhibition on Wednesday evening. They moved back and forth, with the little girl beating the inspiring drum in tune with the songs that have everyone sweating. Dusty footprints in usually shiny floors were evidence of culturally deprived and marginalised communities who never ventured into such a public space. It was an unbelievable moment, and something that has never been experience before in the history of Albany Museum.

The exhibition is part of the 2011 Heritage Month of September with the theme: Liberation Heritage in honour of Heroes and Heroines of the Liberation Struggle. It was kindly loaned by the University of Cape Town’s Library Visual Archives.

"This is what we want," lamented Patricia Mafu, Manager of Museums and Heritage in the Eastern Cape Department of Sports, Recreation, Arts and Culture (DSRAC). "We are striving for transformation".


Mafu, who was accompanied by Sitati Gitywa, an Assistant Manager Museums and Heritage, was introducing Cecil Nonqane, the Chairperson of the Museum’s Board of Trustees, and retired employee of the Museum and DSRAC.

Nonqane, in his speech, summarily narrated the history of the museum then and now, going as way back as 1855, before declaring the exhibition officially opened.

"Many of you were not born then ... things were difficult," he said of the colonial and Apartheid times.

Despite the changes that museums are implementing, Nonqane alluded to the fact that maybe over 90% of the “members of the African Independent Churches present tonight were coming to the museum for the first time”.

With this glorious history of the African Independent Churches, Albany Museum is showing that in the dark days of apartheid the independent churches were always there among the people in their joys and in their sufferings. 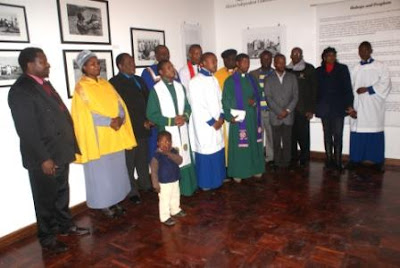 Archbishop Bheyi, in his grace, thanked God for being there in support of the African Independent Churches throughout those difficult times. He appreciated the democratic changes and the Martin West photographic exhibition that is even reaching out to them and showcasing their faith without fear or favour.

Albany History Museum is opened from Monday to Friday. Admission is R10 for adults, and R5 for students and pensioners. Friends of the Museum that are up-to-date with their subscriptions gain free entrance.
For more, visit:
African independent churches to grace Museum
Posted by Communications & Marketing at 10:42 AM