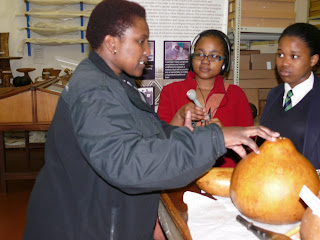 This interview was organised by Refiloe of SAFM for heritage day celebration slot. Speech prepared by Phumeza N.Mntonintshi-Anthropology Curator of Albany Museum assisted by Nomthunzi API.

This is a brief Anthropological view on Graham’s town history and heritage on artefacts that represents our indefinite Cultures. Albany Museum is the second oldest museum in the country about 154 years old now. We do research in and around Eastern Cape and we also keep artefacts of high standard which comes from all over the world for research and represantivity purposes.

Briefly in this section (Anthropology), we Curate, Conserve & Preserve tangible and intangible Cultural heritage that is not different from the rich &unique South African heritage for all, as in Rainbow nation status.

The Traditional use of Artefacts like Calabashes and Clay pots by the Eastern Cape inhabitants in the past, for example Xhosa speaking people ,Sothos,Khoisan,etc reflects that they were commonly used as domestic tools to conduct household daily chores such as Milk vessels,bowls,water and beer containers. Hence I believe that some other Ethnic groups in Southern Africa were using them for a similar purpose. Again when it comes to Traditional music instruments that we have inherited from the past such as Drums made from Ox skins and wood, Uhadi made from a special type of Calabash and strings as well as Ox horns shows that our people entertained themselves by using what was available at their disposal without necessary buying them. With that information I can further conclude that they were Economic or saving in their actions so to speak.

Also Graham’s town is well known for being the home of the famous Egazini Heritage site (Battle field) where Soldiers from various Ethnic backgrounds, come together yearly and reflect unity in diversity by staging fights and acting what happened there years ago. We also the home of 1820 Settlers Monument, Fort Selwyn, Fort Brown & Anglo-Boer war grave on the way to Fort Beaufort which also add to our rich GHT Heritage. Again Makana Municipality is named after a famous Robben Island Museum prisoner Makhanda or Nxele. There is a lot that one can say about Graham’s town since it also is the home of annual National Arts Festival held every winter showcasing arts and culture of various Ethnic groups from all over, hence attracting tourists and boost local economy plus tourism industry.

Lastly our dept reaches out to schools through Outreach programmes and in-house educational focus weeks whereby we present our researched information to school groups, researchers and the general public.