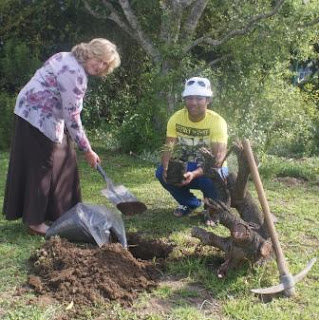 Fleur Way-Jones has donated a very important real yellowwood tree as a way of saying "thank you" to all her colleagues at Albany Museum.

"This is the most valuable tree ... so are you," said Way-Jones as she bid farewell after 25 years of dedicated service. She was a curator of both the Albany History Museum and Albany Observatory Museum.

Way-Jones' passion about the tree makes her face glitter with happiness.

"This is a genuine Knysna yellowwood tree. It symbolises long life," she said.

Phumlani Cimi, a botanist at the Selmar Schonland Herbarium which is part of Albany Museum said that they have specimens of the real yellowwood, and its scientific name is Podocarpus latifolius.

"This is a national plant, and is very valuable," he said. The herbarium only deals with identifiable specimens that have relevant information such as fruit, flower or leaves. He said they do not keep large or living specimens.

"These belong to nursery, botanical garden or the forest," Cimi said of some perceptions whereby people come with large things such as pot plants.

The South Africa.info website reports that the yellowwood family is ancient, having grown in this part of Africa for over 100-million years. 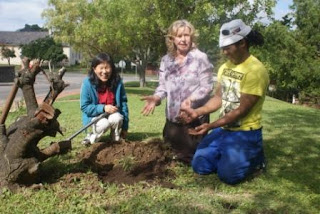 Way-Jones planted the tree next to the Museum's history building in Lucas Avenue. She was assisted by Sabata Mageza from the Museum's Maintenance Department, and her visiting Korean friend, Dr Inhwa So.

According to Way-Jones, there were six other yellowwood trees that were donated by Scifest, but four were stolen.

"Don't be stolen," were her last words.
Posted by Communications & Marketing at 5:07 PM