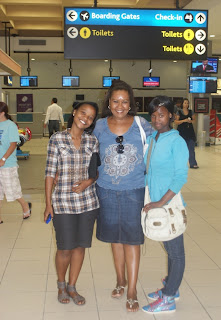 The unexpected happens to those who wait patiently and devote their efforts to goodness. For Nolubabalo Ralo, this has come too early though, and without much sweat. At 18, her leadership role, skills, and enthusiasm in whatever she does has paved her way to be part of the selected few by the Nelson Mandela Museum to go to the International Youth Camp in Germany from the end of March to the beginning of April this year. Ralo was selected from a group that participated in the 2011 Nelson Mandela Museum’s Youth Camp in Qunu, Umthatha.

Madinda has been working tirelessly in trying to convince schools to select learners with potential, such as that of Ralo. Another programme that Madinda is leading is the Robben Island Museum Spring School that happens during spring school holidays in September.

Ralo, when interviewed on her return from the Youth Camp said that she and Gcobisa Mjele from Mary Waters High School would never forget such an opportunity, and are grateful that Albany Museum chose them. Also, on her write-up for the July 2011 issue of Upstart, a youth newspaper by the youth where she is a captain for Ntsika High School Upstart Club, she echoed the same sentiments.

“What? Bergen? Belsem? Lower Saxony? I have never heard any of those, but Germany, yes, at least,” she said, laughing with excitement. Ralo is very appreciative of the rare opportunity offered to her, and hopes to make the best of it.

The Ntsika High staff and students are very excited about the whole trip. Ralo was saying that her pictures are all over the school passages, written ‘Going to Germany!’

Nompumezo Makinana, Project Coordinator of Upstart, a youth newspaper by the youth, is very fond of Ralo’s selection.

“We are very proud that she has the opportunity to go overseas. She is outspoken and lively,” Makinana said.

She said that Upstart members are always encouraged to broaden their horizons and to think beyond their contexts. She beams with excitement that Ralo seizes every opportunity given to her and excels in executing it.

The fright of getting into a plane and going on a long trip abroad is no longer bothering Ralo. She recently took a flight to Johannesburg to attend a workshop that aimed at capacitating learners for the trip, and also encouraging them to make a joint planning regarding the presentation they will render in Germany.

In fact, she is the only one so far in her family to achieve such status. Her family could not contain her excitement.

Five learners from different provinces of South Africa have been selected for this year to interact with European learners. They will be accompanied by Bongiwe Qotoyi, the Education, Material Development and Outreach Officer at the Nelson Mandela Museum.

In her communication, Qotoyi stated that this is an annual event emanating from a cooperative agreement in areas such as trade, industry and culture signed between the government of the Eastern Cape in South Africa and the government of Lower Saxony in Germany six years ago.

That agreement also resulted in the Nelson Mandela Museum (South Africa) forming a partnership with the Anne Frank House where both institutions started exchanging young people on an annual basis in what became known as the International Youth Camp.

"This cultural exchange program helps the young people in both countries to understand each other’s history and cultures. Central to these learning activities are human rights debates," Qotoyi said.

Qotoyi will be assisted by Lwazikazi Madikiza, the Nelson Mandela Museum Camp Pioneer. Madikiza is a product of the youth camp herself, having attended her first international tour in 2008. She is currently completing her Master of Science in Environmental Biotechnology at Rhodes University.

Madikiza encourages the participants not to be worried about their background but to take full control of the opportunities that South Africa offers, and not to take them for granted.

The next group for the 2012 Nelson Mandela Museum’s Youth Camp will start during the school break for the winter holiday starting in June.
Posted by Communications & Marketing at 1:25 PM