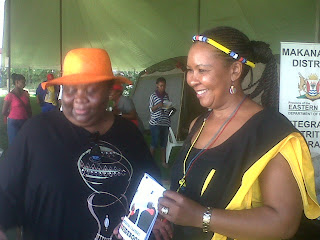 The HOD Mobile Museum Ms Nozipho Madinda and Mr Luvuyo Mayi of the Geology Department attended the Human Rights Celebrations at Port Alfred on the 21 of March 2012. Our part was to exhibit the Albany Museum artefacts.

In Albany Museum exhibition we explained the artefacts of different research departments. The HOD of the Mobile Museum showed the education booklets and the career guide of the Albany museum to the Premier Noxolo Kiviet and the MEC Xoliswa Tom. They showed interest on that and I told them those carreer booklets are in demand in schools and they are very few due to the financial constraints so as the Mobile Museum co-ordinator needs funding for that.

The purpose of the day was done by the honourable MEC Xoliswa Tom. Her speech was about the 69 people who were shot and killed at Sharpeville on the 21st of March 1960. The people fought for freedom and the freedom was not free. She told the audience the story of ex-prisoners of Robben Island and it was touchable to them.

She also encourages the educators to teach the Human Rights lessons and learners must learn. The Mobile Mobile co-ordinator would like to thank the Department of Sport Recreation Arts and Arts for the invitation.
Posted by nozipho madinda at 2:01 PM