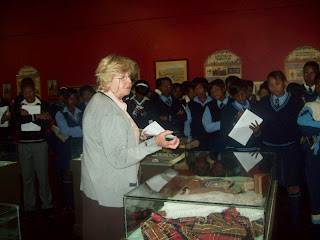 On the 3rd of May 2012 the HOD of Mobile Museum Ms Nozipho Madinda and the Museums and Heritage officer Mr Zandisile Sakata organized Makana Freedom Festival for four schools namely Kutliso Daniels,TEM Mrwetyana, Hendrik Kanise and Riebeeck East Combined and these are all High Schools. The focus was on the Grade 10 learners, fifteen learners per school.

The purpose of this programme was two-dimensional, creating access to museums (role and importance of museums), introducing learners & educators to sites around Grahamstown of historical significance. Ms Madinda took the learners to different galleries in the Natural Science Museum and also in the Observatory Museum. Mr L Mayi gave a talk about evolution and fossils and Fleur-way Jones took learners to Contact and Conflict gallery and also in British Settler gallery. Learners were given a chance to ask questions. 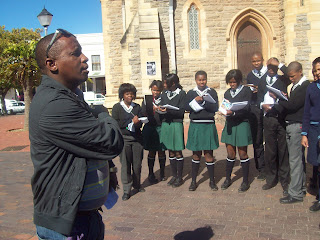 Mr Otto Ntshebe (tour guide) introduced learners to sites of historical importance that are in town (yellow house, high court, town hall, monument in high street, cathedral etc) and our destination was the Egazini Monument. Mr Ntshebe informed the learners about the 1819 Battle of Graha Grahamstown and the memorial.

Learners were very eager and enthusiastic to be introduced to museum world and heritage sites of historical significance. During the tour they were taking notes and asking questions. The tour helped them immensely as some of them they were having assignments pertaining heritage sites in the Makana Municipality, especially in Grahamstown.The principal of Riebeeck East Combined School who was part of the tour said that “we made workload easier for them by introducing this programme”. Mr V. Mcuba of Kutliso Daniels agreed that this programme is worthwhile and it must not cease for the benefit of their learners and institutions.

Posted by nozipho madinda at 12:30 PM