Museums in a Changing World 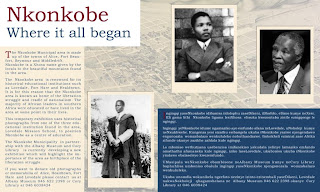 All roads lead to Alice for the 2012 International Museum Day (IMD). Albany Museum continues to reach out and helping other disadvantaged areas to establish and improve their own museums. The new Alice Museum has been graciously funded by the Nkonkobe Municipality in the Eastern Cape Province.

This is definitely in line with this year's theme: Museums in a Changing World -New challenges, New inspirations. This is how Albany Museum is responding to the world, regions and locals that are undergoing massive social, political, and economic changes.

The Alice Museum will be officially launched on the International Museum Day, on 18 May. Thabang Tshobeni, Albany Museum's Exhibition Officer, has skillfully developed an exciting, ground-breaking exhibition. This looks at the history of Lovedale, Healdtown, Alice, the press and the Oromo slaves. The area is well known for its missionary schools and the university where most African leaders that include Oliver Tambo (former long-standing President of the African National Congress), Dr Kenneth Kaunda (First President of Zambia) and Nelson Mandela (first Black President of the democratic South Africa) have been groomed. It has been conceptualised by Bongani Mgijima, Manager of Albany Museum. Professor Jeff Peires and Vathiswa Nhanha, both from the Cory Library, greatly helped with the rare photos and text.

It is hoped that the museum will encourage the heritage and tourism of the Nkonkobe Municipality, resulting in more tourists, researchers, and academics visiting the area and spending more time. It will also contribute to the education of the area, in particular its history.
Posted by Communications & Marketing at 1:06 PM